Cubana Chief Priest, a celebrity bar man, has finally replied the brother of Kelvin (Maria’s alleged boyfriend and Cubana Chief Priest’s sister’s ex-husband), who appears to be more interested in the story than the victims, challenged him to an online drag session.

Following the viral story of Cubana Chief Priest accusing Maria of snatching his sister’s husband, his ex-brother-in-law dared him to respond. He also hinted that he could have some information about his exploits.

In a recent development, the entertainment billionaire revealed the prerequisite for responding to Kelvin’s brother.

According to him, he must be paid in pounds before offering any form of response. 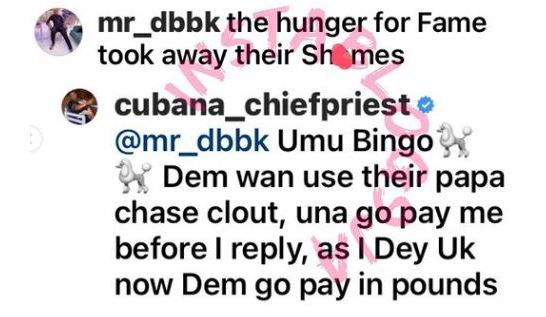