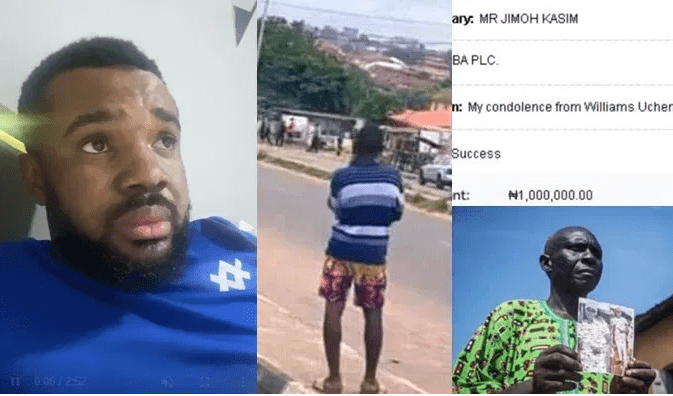 Popular Nollywood actor, Williams Uchemba has reached out to the family of the late jimoh Isiaka, who was shot by the Nigerian police in their bid to disperse the EndSARS protesters.

The actor gave the family a sum of one million naira as a consolation to their deceased son.

It will be recalled that the victim of a stray bullet in Ogbomosho, Jimoh isiaka was shot amid protesters who are going about with the peaceful protest before Nigeria police interfere.

in other to console the family for their loss, Williams Uchemba has set out to locate the father as he took to social media to announce that anyone who has contacts with the Oldman should DM him or put it in his comment section.

“PLEASE HELP ME WITH JIMOH ISIAKAS FATHERS CONTACT INFORMATION AND THE FAMILY OF THE VICTIMS THAT WHERE KILLED YESTERDAY. HE CAN’T GET HIS SON BACK THE LEAST WE CAN DO IS TAKE CARE OF THEM.”

Not quite long after, he took to Twitter to announce, he had found him and has sent him a token of one million naira.

“THANKS GUYS I GOT HIM AND SENT 1MILLION TO HIM. I WAS ABLE TO REACH THE FATHER OF THE YOUNG BOY JIMOH ISIAKA THAT WAS KILLED MY THE POLICE DURNING THE PEACEFUL PROTEST IN OYO STATE AND BY THE HELP OF GOD I SUPPORTED HIM WITH 1,000,000 (ONE MILLION NAIRA) IN AS MUCH AS I KNOW THAT MONEY CAN’T BRING BACK THE DEAD, THE LEAST WE CAN DO IS TO SUPPORT THEM IN ANY WAY WE CAN.

“I ALSO NEED THE CONTACT OF THE FAMILY OF THE POLICE MEN THAT WAS KILLED YESTERDAY IN LAGOS AND THE OTHER VICTIMS, I HEARD NOTHING HAS BEEN DONE FOR THEM, PLEASE IF YOU HAVE THEIR CONTACT HELP ME WITH IT.

AND IF YOU WANT TO ALSO SUPPORT IN ANY YOU CAN PLEASE DO. WE ARE ALL THEY HAVE.”