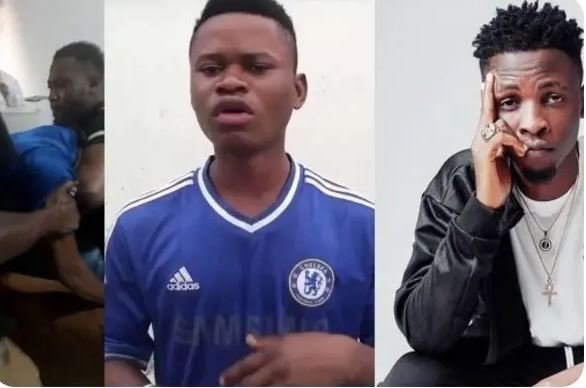 The young Nigerian lad who was beaten up for voting Laycon despite collecting airtime to vote for another candidate, has spoken up about the turn of events.

Yesterday, a video went viral on social media, which showed the moment the young lad was nabbed voting another candidate than the one he had agreed on voting.

The supervisor of voting center for Dorathy was checking through their phones to ascertain what they were doing but it later turned out that this young boy has been voting Laycon.

This boy deliberately ignored them and was voting Laycon instead of Dorathy. When he was caught, he was beaten by the supervisor. Other people in the centre joined in beating him for wasting their card on Laycon while some were recording the moment.

He has now given his own account of what happened stating that he was on his own, minding his business when Dorathy’s team members approached him and offered him airtime to vote for Dorathy.

He collected the airtime, voted once for Dorathy and since he’s always been rooting for Laycon.

However, while voting, the young boy was caught voting for Laycon and he said they beat him up to the extent that he had to buy pain relief tablets to ease the body pain.