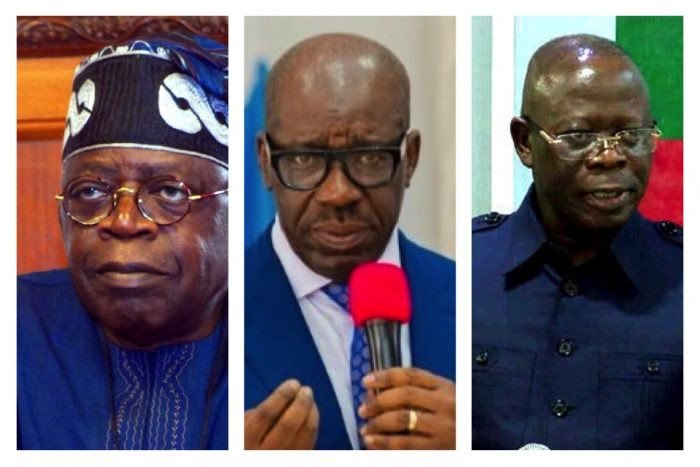 Godwin Obaseki, has said that his government will have no mercy in dealing with former governor of the state, Adams Oshiomole if he attempts to disrupt the peace in the state.

Obaseki said this when he appeared on ARISE TV this morning, September 22. While responding to questions on whether he would be sending Oshiomole out of the state following his re-election, Obaseki said ”I don’t have any plans to.

It is totally up to him.” Governor Obaseki said the likes of Tiubu, Oshiomole, and others pose a threat to Nigeria if they continue in the manner in which they play politics in the country.

“For us, the challenge with Oshiomole and Ahmed Tinubu is that except they change their ways, they pose a great danger to our society because they extra-constitutional players.

When I was in APC, I was always surprised at the role of the Leader. There is nothing in the constitution of our country or even in that party giving anybody the role as a leader. The title leader has no constitutional backing.

They cannot sit in their houses or wherever they are and can determine who becomes what, who gets into what office. It is very anti-democratic. When asked if he will ever consider returning to the APC as he has won the battle to return to office as a governor, Obaseki said ”I think it will immoral and unfair to begin to even have any consideration at this point about leaving this platform that gave me the mandate.

There must be morals in politics. People must be ethical in their politics. At this point in time, I do not think it is right or is the proper thing to do to jettison the platform the brought me into power, particularly as I have no issues or challenges or problems with the party now”

watch the live interview below;