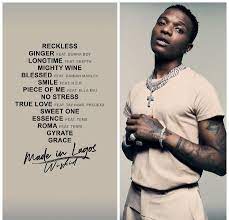 Wizkid has been nominated for five Soul Train Awards in 2021. This places him third on the list of most nominated acts, after only American artists H.E.R. (eight nominations) and Chris Brown (six nominations).

Wizkid’s fourth studio album, ‘Made In Lagos,’ is the first African album to be nominated for “Album of the Year” at the Soul Train Awards.

This year’s award will hold on November 28th, 2021, at the Apollo Theatre, and it will be hosted by Tichina Arnold and Tisha Campbell.