Home » Entertainment » Burna Boy Shares His Biggest Dream For Next Year, 2022 (Something Bigger Than Grammy Award)

Burna Boy, a Grammy Award-winning artist, has revealed some of his hopes for the year 2022.

At an Instagram post, Odogwu stated that he wanted to stage a concert similar to Live Aid in the UK’s largest stadium.

He wants all African performers to perform at the concert, he says.

Burna revealed his plans to use the proceeds from the event to aid the people of Africa. He believes that artists all across the globe can help Africa via their work.

Though a dream, Burna Boy stated that he would appreciate it if the British government support him fully. He backed his appeal with the fact that most African countries were colonized by the British. 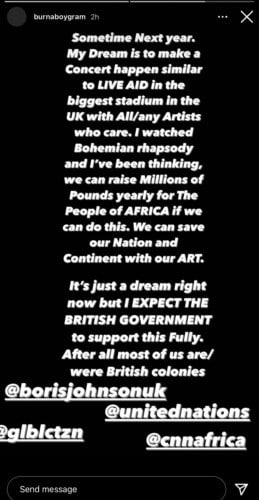