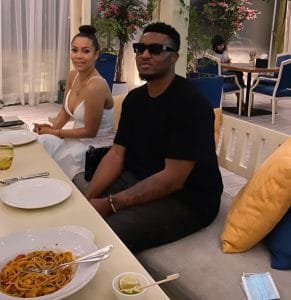 Kelvin Anene’s younger brother has posted a photo of himself with Maria, who is reported to be dating Kelvin, as he blasted Cubana Chief Priest for publicly exposing his brother.

Recall that  Cubana Chief Priest brought out Maria.  He accused her of dating his sister’s husband, Kelvin Anene, and threatening his sister.

Kelvin’s younger brother stood forward in his brother’s behalf, alleging Kelvin had been separated from Cubana’s Chief Priest’s sister since 2018 due to her problems.

To make matters worse, he has now shared a photo of himself with Maria, his brother’s purported sidechic.

He also threatened to reveal information on the Cubana Chief Priest and his wife since he was dragged.