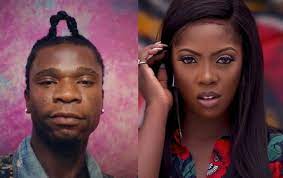 Speed Darlington, has weighed in on Tiwa Savage’s tape scandal, claiming that the singer published the video herself.

Akpioku, as he is affectionately known, stated this during an Instagram live session, noting that Tiwa Savage purposefully posted the video on her own in order for her to remain relevant.

The 2023 presidential candidate asked people to trust his side of the story as he discreetly aired his viewpoint on the recording that has been circulating on social media for a few days.